Including COVID-19 Case Updates, Where To Get Rapid Antigen Tests (RATs) and Patient RAT Screening.

The National Bowel Screening Programme (NBSP) was launched in the South Canterbury region just over eight months ago.

The free bowel screening programme is already making a difference for residents in the region and their families. According to the Ministry of Health, people diagnosed with early stage bowel cancer who receive treatment early, have a 90% chance of long-term survival.

Dr Thomas Caspritz, Clinical Lead for the South Canterbury DHB National Bowel Screening Programme (NBSP), says the programme is tracking really well with a participation rate, as at 18 June, of 65% - 5% above the national target of 60% participation.

Over 2,400 South Canterbury people have chosen to take part by using the discreet, simple and clean-to-use home test kit – where a small sample of bowel motion is collected on a test stick, placed in a sample tube and returned via freepost for testing.

From these, more than 2,200 returned tests have shown a negative result, which gives peace of mind for these residents and their families.  Another 120 tests have come back as positive for the presence of blood.

So far, 77 people in the region have had bowel screening programme colonoscopies. In approximately 80% of these cases polyps have been found and removed. We have also detected early-stage bowel cancer in three people.

One is Dene Madden from Twizel, who is keen to share his story so that others know how valuable and important it is to do the test.

Dene, who turned 67 last December, received his test kit at home in mid-January and pro-actively did the test straight away and sent it off. He received a positive result shortly afterwards and his doctor contacted him and referred him to the South Canterbury DHB NBSP team.

Dene says things moved quickly after that. “I sent the test in on a Wednesday afternoon and the following Monday the medical centre rang requesting me to come in,” he adds.

“They explained the test results thoroughly and booked me in to Timaru Hospital for a colonoscopy. The appointment was a fortnight after, which was I thought very fast work.”

Dene underwent a colonoscopy in March at the Timaru Hospital Endoscopy Unit. Dr Rene Van Den Bosch removed some polyp specimens and sent them off for biopsy analysis. One of these came back showing it was an advanced adenomatous polyp and bowel cancer was diagnosed. Dene has since had surgery at the Timaru Hospital and the cancer looks like it has been fully removed and he is now undergoing chemotherapy.

“I am one of the lucky people who has never been to a hospital for anything before, so my fears were all due to ignorance as to what happens, what you take and what you do,” he adds. “However, I would have to say the staff, and I mean all the staff, could not have been better or more helpful.”

Dene says that everything was carefully explained to him in an understandable manner, which he believes is very important because he reckons when you are diagnosed with cancer you are still in some shock.

“They supplied an after hours’ number for me to ring if I needed clarifications or had any more questions. I can only congratulate then on their work, it was superb.”

Meanwhile, Dene stresses the importance to those in the South Canterbury community between the ages of 60-74 to complete the bowel screening test.

“This is extremely important – even if you have no symptoms,” he says. “Still complete a test, it could save your life.”

Anyone of any age – not just those aged between 60-74 years – see your doctor now if you have any bowel symptoms that concern you. 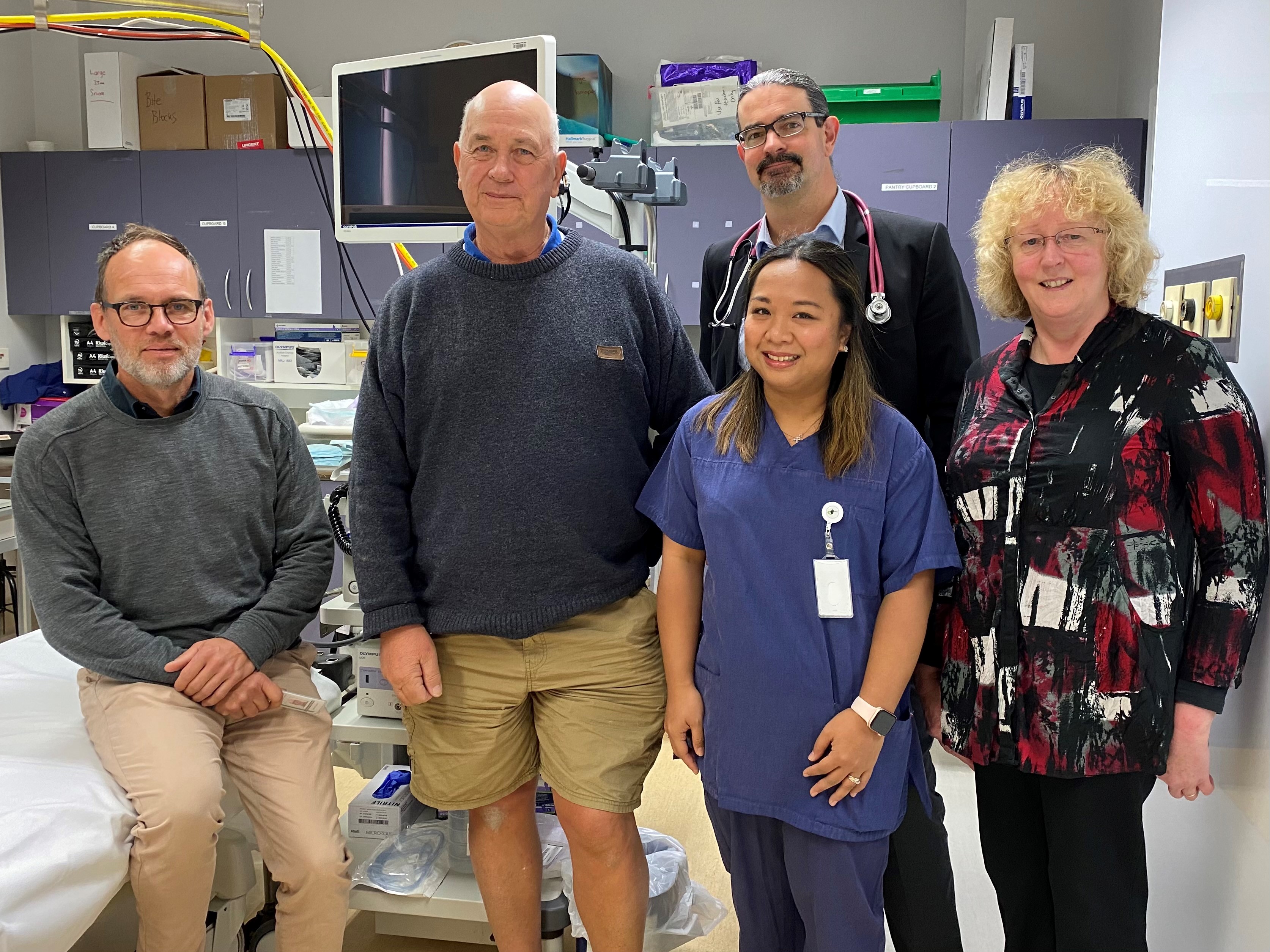